The weekend schedule was a very busy one. My daughter had field hockey games all weekend in Coquitlam plus I had to work 9-5 on Sunday. I was worried about fitting in this long run. The plan was to bring our running stuff to the field hockey games on Saturday and see how we felt and if we could fit it in between games. Well it poured rain that day and we only had about an hour in between the 1st and 2nd game but we also didn't want to watch the game soaking wet. Anyways it turned out that they won both games so we didn't have to stay for a 3rd game at night. We went to visit my family instead who lives nearby.Plan B was to set the alarm early for 6am and run before I had to work. I am lucky enough to work from home so it's nice to have this option. Alarm went off the next morning and I promptly looked at Jeff and said "No way! Not gonna happen!"  I was too tired and sleepy after a not so great sleep. Alarm got shut off and back to sleep we went until I had to get up for work.Plan C was to run after work.I was SO bummed to be working as I was missing a family birthday party and my daughters games. I was SO sad!

My daughter's team ended up making it to the finals of the U16 BC Championships and they WON in a shoot out!!!! SO PROUD!! Jeff got it all on video so I could watch it.Here's a pic of the Gold medal champ. Isn't she beautiful!? 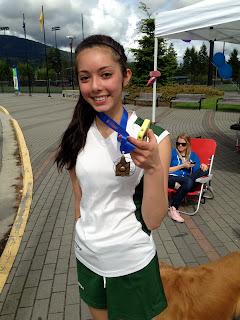 So work finally ended and we fuelled up with some Power Bar Jellies and Honey Stinger Waffles. Off we went. We were planning on doing 2 loops of our favourite long road but nope that SHIT smell was still there! Gagged some more and turned around. It was kind of good because we discovered some other beautiful back roads in our neighbourhood that weren't so stinky. Have I mentioned how lucky we are!? I love our area!There are rarely any cars on the back roads we run on as again we are near a lot of farmland but when there are cars we have to manoeuvre around the road to avoid them. I find I have to run in the middle of the road otherwise I get really sore on one leg to compensate for the incline on the side of the road. This can be a bit distracting but the price you pay I guess for the beauty we choose to run in.Okay so this run was feeling awesome!!! I was really nervous as this would be our longest run to date! I have never run over 10k before. I was worried about starting out too fast and not being able to last.  I just went with what felt comfortable and it seemed we were going faster than any of our previous long runs. We don't have a Garmin yet but really want to get one. Our trip to France next month is holding us back! We rely on the MapMyRun app. However mine is always quite a bit off of my husband's stats and my phone is a lot older so we go with his results.I was feeling really solid and strong for the first 8k. My mantra was "you got this!" And I kept saying it over and over. At 7k we ate a few more jellies. They are really chewy so they definitely need to be washed down with water.  At this point we turned around and I was elated to be more than 1/2 way through and still feeling strong.  At 10k I asked Jeff for our time and it was about 1:09 which was slightly faster than our previous 10k's so I was happy with that. Only 2k more to go!! I can do that in my sleep! Ha!Total time: 1:22Pace: 6:54It's certainly not breaking any speed records but it was a nice solid run and it felt good with no major aches or pains!! There were high 5's to go around!Here are some cool pics Jeff took along the run: 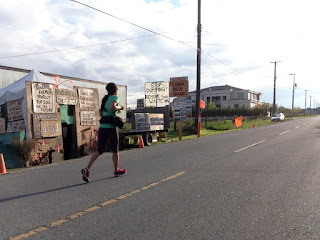 Horrible pic of me but whatever who said running was glamorous!? 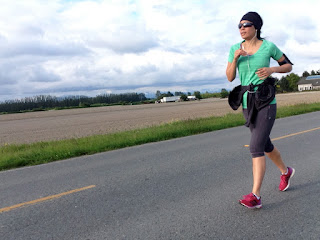 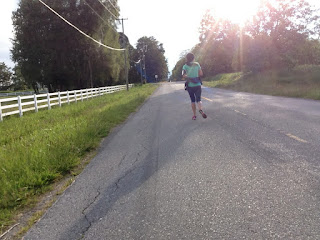