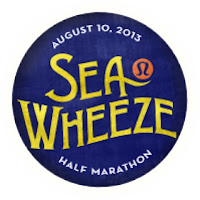 WE DID IT!!! We completed our first 1/2 marathon and we enjoyed it!!

The whole experience was amazing and we are so thankful that our first race was such a rewarding  one. I am sitting here struggling with how to put it all into words so this might be a long post.

I guess I will start with the day before and our volunteer experience.

Friday was a very busy day. I got up in the morning and decided to do a very easy 30 minute run to keep my legs loose. Jeff was working that day so I went solo. It was really hot and it wasn't the best run but I just had to shake it off.

Not only were we volunteering at the race and running it, but it was also my daughters 15th Birthday. After the run we were having a family picnic and then 7 of her friends were coming downtown for dinner and sleeping over in a hotel room we got for them. So I was also crazy busy with baking and making food for the celebrations. Again, all solo since Hubby was working.

The whole reason we were inspired to run the SeaWheeze this year is because we volunteered at the aid station last year. We loved it and wanted to volunteer again. So we signed up to do race package pick up on Friday night. Our shift was supposed to be 4:30 to 9:30 but with Jeff working, there was no way we were going to make that. Plus we wanted to make sure we had time to have a healthy meal. We were lucky enough to still be able to volunteer from 7:30 - 9:30. Perfect!

We headed downtown and checked into our hotel the Hyatt which was awesome. It was only a few blocks from the convention centre. We went for dinner at Joeys and had a super healthy salad with quinoa and lots of veggies and shared the chicken Alfredo. I think it was just right.

Then off we went to our volunteer shift. We got these super comfy tees.

The Yogi T for me and the Five Year Basic T for Jeff. They are really soft! We got a quick demo of how to get racers their packages and it was so well organized. I loved this because we got to meet a bunch of the racers and talk to them about their race goals and how their training went. The majority of them were from out of town which was very cool. This actually calmed my nerves a lot. Talking to other racers really helped me realize that everyone was just there to do their best and we are all a part of a great community and support system. It felt good to wish them luck and for them to return it to me.

There were lots of out of towers rushing in last minute from planes, trains or buses trying to pick up their packages in time. It made me feel not so stressed anymore seeing them run in with their luggage still in tow!

Anyways, here are the race packages. Inside the bag was our race number on a wristband and a timing chip.

As it wasn't very busy during our shift, it gave me a chance to check out the store. I was sad to see that there was pretty much nothing left and I came away with nothing : ( Hubby got a very cute singlet top though.

After our shift we walked back to the hotel and went to the hot tub to soak for 30 minutes before bed. There were some other racers from California in there as well as some soccer players from a team that was playing our Whitecaps team the next day.  We were meeting the nicest people and staying downtown was the best decision.
I laid out my race outfit like a good organized racer. 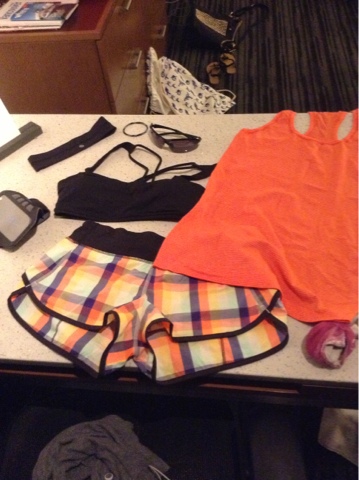 And then off to bed I went. Unfortunately my sleep was pretty terrible. I was very restless. Sorry if this is too much information but I ended up with the absolute worst timing as it was that time of the month for me and I had horrible cramps. I woke up in the morning feeling very tired and had MAJOR stomach issues : ( I was worried if I was even going to make it. Hubby also didn't have the best sleep.

We drank some water and ate a breakfast of oatmeal with chia and some peanut butter banana bread that I baked. I couldn't get too much of it down but did my best as I knew fuelling was very important.

We were supposed to meet our friend Zyta in the lobby for 6:20 but my stomach issues delayed us a lot so the plan was to meet her somewhere at the corrals.

I was finally ready to head over to the start line. In our elevator we met a really nice racer from Seattle all decked out in SeaWheeze gear. It's so cool to see the camaraderie with all the racers. It's like being a part of a club. He walked down with us and gave us some positive advice when we told him it was our first race. He said the energy of 10,000 other racers would carry us through. He really helped to calm my nerves.

I did bring a long sleeve throw away shirt as I thought it might be cool waiting to start but I didn't need it. The temperature was just right and overcast! Yes, praying to the weather gods worked! I was so happy that it wasn't going to be blazing hot!

We made our way to the 2:30 finish corral and try to find Zyta. Everyone looked awesome!! Definitely the most well dressed bunch of racers I have ever seen. So many bright colours and the majority of people wearing the SeaWheeze shorts just looked so cool. 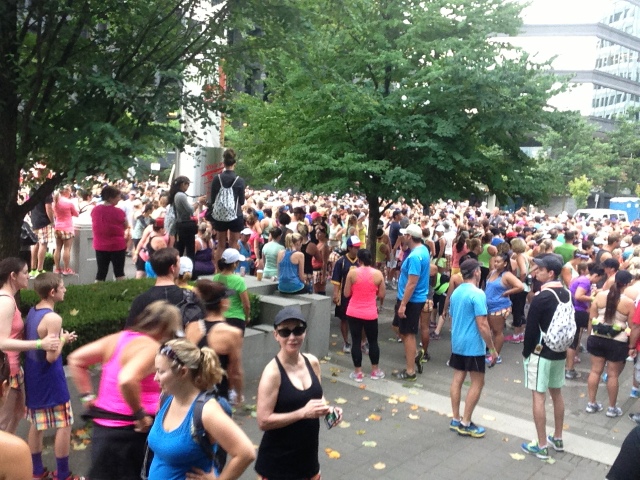 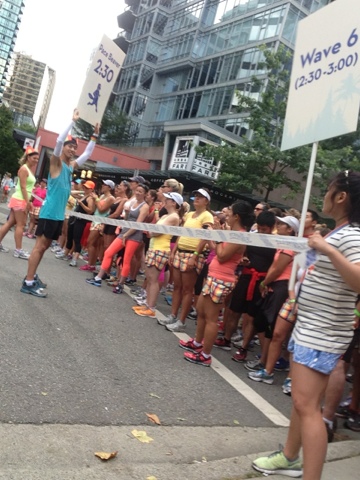 Unfortunately we weren't able to connect with Zyta but we sure tried. Apparently her phone was dying. I really wanted to see her and give her a good luck hug.

Before long it was time for our wave to head to the start line. They did a good job of pumping us up with great music and lots of cheering as well as doing the wave.