Wow, talk about starting off Week 1 in full force! And we are in pain because of it!

Because of Christmas, the only way to be on track was to do the 3 scheduled training runs for the week back to back. I don't think we have ever run 3 days in a row but it was the only option to keep us on schedule.

I also have a friend who has just started running and all of her completed runs were putting me to shame! It was a great motivator to get me out of the winter running blues. It's funny how someone that you inspired can just turn around and inspire you right back!

I worked on Saturday so we planned to run around 4ish. It gets dark really early so by about 4:30 there is not too much light left. It was another 5k on the schedule and we mapped out the 5k the night before pretty perfectly so we did the same route - into Steveston Village, to Garry Point Park and back.

It was a little bit cooler than the night before and I said I wasn't going to wear my vest again but decided to forego my running jacket instead, wear a warmer top and keep the vest on. It was a perfect choice. I wasn't too cold or too hot.

Here is my OOTD: 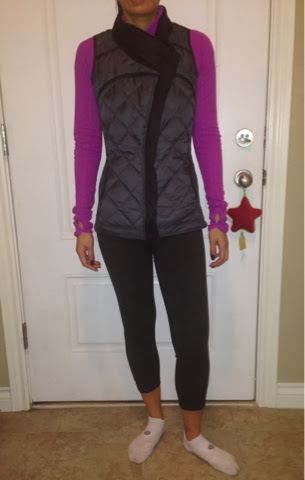 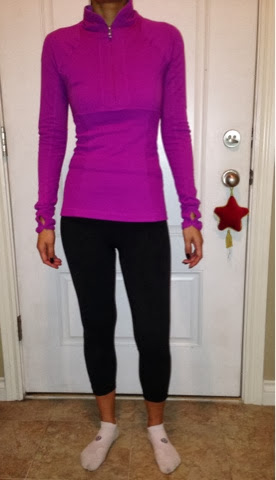 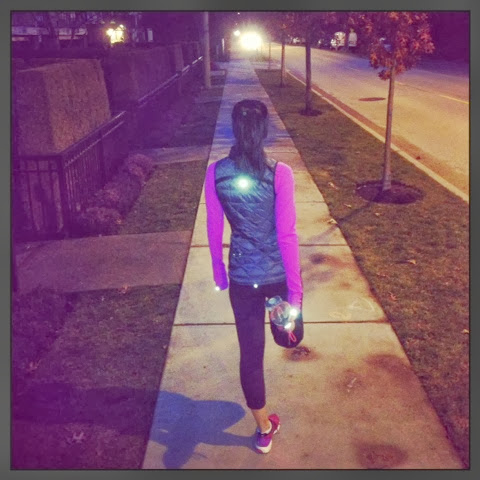 I wore my Ebb and Flow crops which are my fave type of Lululemon crop. They are made of this seamless compressive material that doesn't attract lint or cat hair like luon does. This version of the crop is a lot longer than the current In The Flow crops. I like the longer style for winter running. Only problem with these crops are that they are a tad big on me. I got them when I was a bigger size so they are a 6 and I really am a size 4 right now so they got a little saggy in the crotch by the end of the run but nothing that I needed to keep adjusting. I also wore a rulu (running luon) zip up pullover from a few seasons ago and a swiftly t-shirt underneath. Rulu is so cozy soft and moisture wicking at the same time. For winter, I like to layer with a thin sweat wicking top first and then put something warmer over it. My absolute favourite piece of clothing for winter running right now is my What The Fluff vest that I got last year. It is so light that it doesn't add any weight but it it gives just that extra layer of warmth over your body. It is perfect. It is also reversible to black and has great reflective spots for night running.

This run was harder for me than the Friday run. I had a hard time with my breathing. We did go a bit faster but it was still more of a mental challenge for me to get through. Not every run is going to be great! I know that for sure. But we still did it!

We woke up on Sunday feeling quite sore. Two 5k runs back to back after about a month off was hard on our legs so to get out there and do the last run of the week was a mental battle of will. We had a nice lazy morning but eventually got out there to do a 6k. This was a much better run. It just seemed to go faster than the previous 2 runs and that extra kilometre didn't hurt us.

Here is my OOTD: 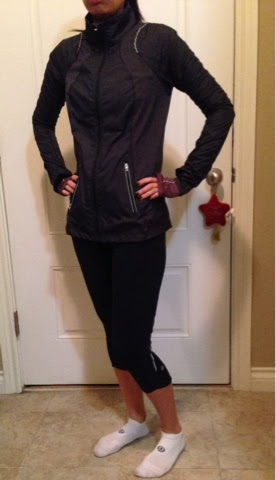 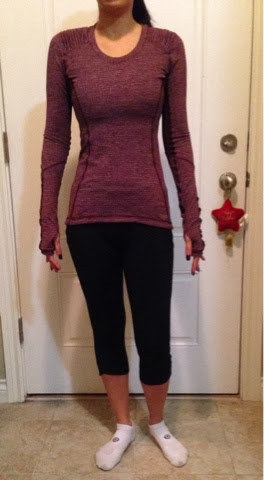 I wore some old Run Chase Me Crops which have a nice big side pocket and a waist cincher which helps since they are a size too big as well. I went with a nice think rulu top called the Star Runner pullover. I love the feminine details on it and the reflective bits on the arms. I wore my Nothin But Run Jacket which is really nothing but a wind breaker with some great venting, reflective details and good pockets.

We were incredibly sore after so did some stretching and then rewarded ourselves with a movie. We were going to see Catching Fire but it was sold out so we saw 47 Ronin instead. I had no idea what it was about but if you told me it was a Samurai movie to begin with, it would have been my first choice. I LOVE movies about the Samurai. I find their culture and honor system to be so fascinating so I thoroughly enjoyed it.

Oh and I just wanted to give an update on my toe! I last posted about my right toenail that was black. Well that toenail fell off. More like I had to extract it myself. Gross I know. Aren't you sad I didn't post pics of that mess! It didn't hurt because all the skin under it was dead. It has started to grow back but my left toenail has now fallen to the same black fate : ( I think it will be time for some new shoes in the next couple of months with a bigger toe box. I love my shoes and they cause me no other issues but I really would like to be able to paint my toenails in my new Pink Essie Ballet Slippers nail polish color in the summer!

Well that is week 1 in a nutshell. The times were not important to me as we are just building back our endurance right now. Speed training will come, I know. I just have to be patient as always... sigh.

Today is rest day! Thank god! We need it!
Posted by Unknown at 4:56 PM