I saw this on the Lululemon SeaWheeze Facebook page the other day...

“Success is the sum of small efforts, repeated day in and day out.” –

Contrary to popular belief, improving as a runner is not about big efforts or even running fast more often, it’s about consistency and doing the small things repeatedly that will drive improvement over time. 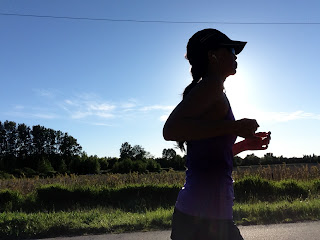 This run was just another baby step towards the giant leap I am working towards but it actually felt like a pretty big step because it instilled a newfound confidence in me and I really couldn't ask for more than that.

Sunday was once again a very busy day. We had to be out of the house by 8:45am to be in West Vancouver for Mikayla's Field Hockey game. Once again we set the alarm for 6am. The alarm went off and we woke up but we promptly fell back asleep again. So much for that plan! It got to be too late to get the run in so we would just have to do it later.

The problem with running later is that you have ALL day to think about it. It weighed on me all day and I got very anxious.

I did get a nice message from my friend Zyta during the day. She is running her first 1/2 marathon as well and we talk regularly about our running journey. She said that she read my blog and it inspires her : ) Me!? That made me feel good. She inspires me because she is doing this on her own and is a Speedy Gonzales!

Throughout the day I pretty much convinced myself that I should expect the run to suck because last week went so well and it was likely time to have a bad run. I basically psyched myself out.

Maybe it was reverse psychology because this run rocked!! Shocker!!

We didn't head out til about 6:30pm because it was a pretty hot day and we wanted it to cool down a bit. This was going to be our longest run yet and we were both pretty nervous wondering if we could last and how our bodies would handle it.

We took the same route as last week and took it nice and easy for the first 5k running about a 7:05 pace. The extra distance was holding us back from going too fast. I have to keep telling myself that the Sunday run is about endurance and not pace!

It was another beautiful evening and it seems everyone decided to take a drive down the back roads of Richmond because it was so freaking busy!! We had to dodge so much traffic and I really think it affected our time because it takes you out of your groove to zig zag around the streets and watch out behind you. It didn't affect me mentally but I think it took its toll on our pace. We may have to try a different route next time as much as I love the area.

At 7k we reached our turnaround point and I was feeling pretty good. I knew we were slower than last week but not by too much and I was ok with that. I just wanted to finish feeling strong. I ate a Power Bar jelly and as tasty as they are they are really chewy and kind of hard to get down quickly. Jeff took along a chocolate Gu gel this time to try and he REALLY liked it. He also said that there was a noticeable pick up in his energy after. I can't say the jellies have done the same for me. I think I may just try the Gu chocolate gel next time. He said it tasted like a melted chocolate bar and it didn't  upset his tummy.

We were doing our 10:1 intervals again and I really, really like this method. It helps me mentally and keeps my form strong all without really affecting our pace. I am definitely a believer in this method now. The other thing that has truly helped me is nasal breathing. Breathing through my nose instead of my mouth really centres and calms me. I don't feel as hectic with my breathing and it makes my mouth less dry. I can't keep up nasal breathing with the faster paces of the short runs but I am finding it has really helped me with the long runs.

At 11k I was getting a bit tired but also really excited that we only had 3k more to go!!  My mantra this time was.. now don't laugh too hard.. "You're gonna turn this shit up!" Lol! I was listening to Will I Am and Britney Spears' Scream and Shout and that line got in my head so I stole it as my mantra. Ha! Cheesy I know!

At 12k, sneaky Jeff started to pick up the pace and was running ahead of me. I almost angrily yelled for him to slow down but instead I sucked it up and sped up to catch up with him.

We finished together AND we still had gas in the tank! YES!!! Our longest run EVER and we finished feeling good! I didn't die! I wasn't limping! I wasn't crying! It was a good run again!

At the end of 14K I was ready for another walk break but I knew I still had gas left and I could run more if I wanted to.

For the first time since we started this training program, I felt like I could actually run a 1/2 marathon. Up until this point I had so many doubts. My thoughts ranged from "this is too hard, why are you doing this to yourself?!" and "I really don't know if if can do this?!" Now I know that if I keep putting in the hard work I can DO this! 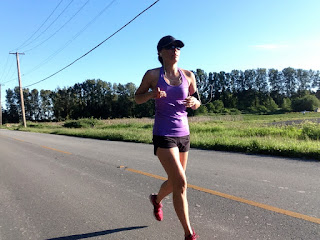